I was going through photos tonight of Tillery Cemetery.  It is an intensely quiet graveyard that is literally out in the middle of nowhere.  I once described it as a place that Bigfoot could effectively hideout without any danger of discovery from curious humans.  I tried to describe it in an email to a descendant of some of the family buried there, and although the description might have been a little involved, I hoped to get the energy of the cemetery captured in some way.  This is from back in February, so the snow was still around.

"First, you have to turn off the main highway and go about 3 miles on a dirt road.  There are maybe 4 houses and farms on the road, including one of the most beautiful old barns I have ever seen.  You cross a little creek, it barely has a bridge over it.  Finally, you turn off that dirt road onto a smaller dirt road, that literally looks more like a path than a road.  The first time I went looking for Tillery, I was sure that I was on the wrong road.  You follow this little road for maybe a mile, it dead-ends at the cemetery.  There are no houses on the road, it is surrounded by woods and a couple of fields with cows.  I know a farmer comes down there daily to feed the cows, but it really does feel like no one has been there in ages.  There are still descendants of some of the families that live in the area, someone does a pretty good job of getting out there several times a year and mowing.  Anyway, you follow this dirt road out into the woods, then around a sharp corner and up a decent sized hill, around another corner and then the road dead-ends at the cemetery.  The road is surrounded by woods for the last half mile or so, because when I went last week I thought that all the snow would be melted and the road dried out enough to get up that hill.  As it turned out, the woods had prevented the snow from getting any sun, so I was surprised by a snow covered road with a deep layer of mud underneath.  (The mud is still stuck on my car, we had snow immediately after that and I haven't been able to wash the car yet!)  So when you get to the end of the road, there isn't really a gate, it is just an opening between the fenceposts.  From the front, the cemetery looks deceptively small.  There is an area in the center that isn't really a hill, more like a bump, but it keeps you from seeing the back half of the cemetery.

Now for the atmosphere!  I can't begin to describe the silence out there.  The cemetery is basically on top of a hill, surrounded by miles of woods and fields.  There are farms in the area, like I said, but it is at least a couple miles walk to the nearest house.  When you stand in that cemetery, you can hear the animals in the woods, birds, even cows in the distance, but you hear no man-made noise!  It is miles from the highway, and that highway is pretty rural anyway.  Even when I have been down there in the summer when the farmers were baling hay, you couldn't even hear tractors when you were in the cemetery.  You almost get a sense of what the land was like when our ancestors lived there.  WAYYYY before all this noise pollution.  I know, you probably didn't expect to get a novel about the cemetery, but this is one that I love, and I love how it is out in the middle of nowhere, and how wonderfully peaceful it feels.  It is hard to
describe to people that have never been to a country cemetery.  In the summer it is full of birds chirping and bees buzzing, butterflies all around.  There are plenty of wildflowers growing, and a ton of peony bushes planted in the back section of the cemetery.  When we were there last week, there was a deer just on the other side of the fence, and lots of squirrels.  Basically, it is as far from civilization as you get around here!

There wasn't really a town in this area, but there used to be a stage coach stop nearby.  At the place on the highway where you turn off on the first dirt road, there is a historical marker for the Yoast Station, it was the original stagecoach stop.  There isn't much else there!  If you turn the other direction off the highway, it goes down to a resort and state park area on the lake, they dammed the river up in the 60's and made the lake.  Tillery is probably less than ten miles from the lake, as the crow flies."

It is truly one of the most peaceful places to be.  The sad fact is that many of the markers are deteriorating, many are fallen and some are even piled up under trees or along the fence lines.  Some families have replaced older, broken or unreadable stones with newer headstones.  I don't always think that is the prettiest option, but it does show how important our ancestors remain even in our busy lives of today.  At least that shows that someone hasn't forgotten!  Above all, I hate to see sights like these: 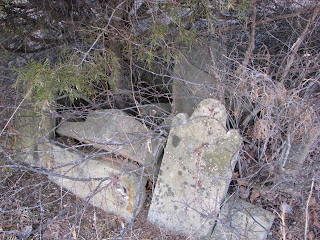 Posted by Johnna Quick at 12:45 AM No comments:

A Rose is a Rose

You don't have to search very hard to find a rose in a cemetery usually.  Old graveyards can be overrun with wild roses in every color.  Some of the most beautiful are to be found carved into stone, as the generations past were fond of the symbolism of the rose.  The flower represented beauty and life, as well as motherhood.  A rose in full bloom meant a long, full life or a person who had made it to the prime of life.  A rosebud symbolized a child, the brevity of a life lost early.  Even the stems were meaningful, as a broken stem meant a sudden death or unexpected loss of life.  All of these could be combined for multiple reasons as well. 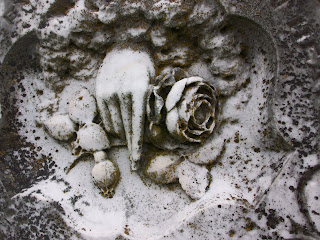 This is from the headstone of a young mother and her son.  Notice that there is a rose in full bloom for the mother, but also a rosebud to represent the loss of the son.  The hand is reaching down from heaven, which symbolized God reaching down for the soul.  A similar carving for the mother only is this one: 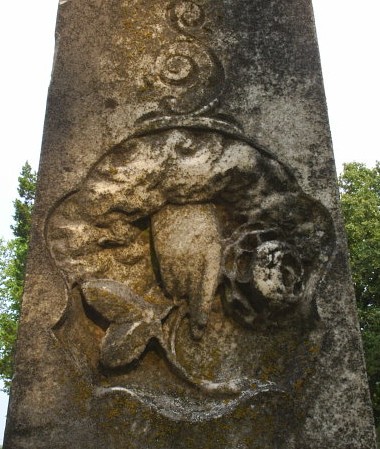 Each detail is important, in many cases the leaves on the stem represent the children of the deceased mother.  What a wonderful way to commemorate the life and beauty of a mother!
Posted by Johnna Quick at 11:44 PM No comments:

I love cemeteries.  Love, bordering on obsession.  Of course, the best kind of love tends to border a bit on obsession.  I seem to be happiest when I am surrounded by the gravestones, whether it is the silence of a small country cemetery lost in the woods, or the muted urban sounds of the largest city of the dead.  I love the rough feel of the aging, sometimes crumbling, stones.  The cool kiss of shade from trees planted in remembrance of long-dead loved ones.  The smell of green fuzzy moss and lichen, or drooping flowers left in the sun.  No matter where I roam, I feel compelled to find the local cemetery, even if I know not a soul buried there.  I have explored graveyards all over the US, even in the ice and snow.  When friends travel, I always request a photo from an interesting cemetery, that's the best souvenir in the world!

I try to physically get out to a cemetery at least weekly, if not daily.  My doctor even recommended it for stress relief and exercise.  Can't argue with that.  It was probably the best prescription I ever recieved.  Even if I can't get to the cemetery, I work on cemetery transcriptions and records every day, even through photographs.  Tonight I am working on Johns Chapel Cemetery, located outside of Ash Grove, in Greene County, Missouri.  We visited last week, and I managed to photograph almost half of the cemetery.  It is pretty large, with some beautiful old stones.  There is wonderful symbolism in the beautiful carvings, and I collect examples as I come across them.  I found this really interesting tonight: 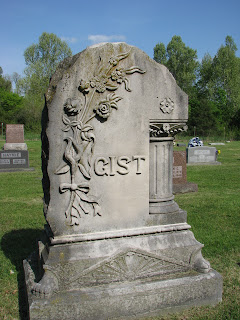 Posted by Johnna Quick at 11:15 PM No comments: